How are you today? I really do hope you had a praise-filled week.

I had an eventful one but then, I thank God I will be able to conclude my post about Job’s life

I kicked off last week, you can have a recap here.

Taking off from where  I stopped, Job thanked God, he praised Him just after he had heard about all the calamities that befell Him

It really was head bursting( this is a term I use when I am extremely marveled at something).

I was so curious to see if he continued to praise God.

His situation actually got worse, he developed a skin disease and he started to murmur.

I really cannot imagine how he must have felt,it would have been difficult to praise God in that state. So I honestly cannot judge him.

He was in so much anguish, he cursed the day he was born. Then he began to wish he had died at birth and began to talk alot about the grave .

He must have thought of taking his life, I can bet because he talked so much about the grave. He talked about it being the only place to find peace from all his troubles

But  thankfully he had his friends round about him, they couldn’t have given him the chance to execute such evil thoughts  . It really is good to have good friends who would stick around in the toughest of times. I pray God brings such friends to us and also give us the strength to be good friends as well.

Job and his friends went back and forth analyzing his situation. I might just be like his friends in thinking though 🙈

Quick to ascribe bad situations to something I did wrong or some sin committed by an Individual.

Job kept insisting that he was blameless and was in right standing with God but his friends suggested that Job had some evil deeds in his background that he had not atoned for.

And the conversation went back and forth until the youngest of his three friends who had been observing burst out in anger.

He made series of wise points but what stood out for me was his question to Job- Have you asked God to show you your faults?

God definitely would have shown him the story behind his situation. God is a good God and He answers His children that call out to Him.

So instead of throwing the blame game or sulking at your situation, consistently ask God the story behind your problem. For He says call unto me  and I will show you great things you could not figure out yourself ~ Jeremiah 33:3

Job turned to God in a different manner and God spoke to Him, it was a very long talk but then God gave Him direction.

Burst my brain!!! God multiplied the things he had before – camels, sheep, children etc  and blessed him with them. 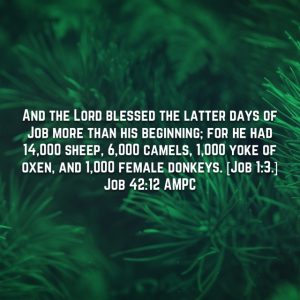 God indeed is a great God, no need to start over analyzing some situation that looks dead or irrecoverable from.

May it all end in praise in Jesus name