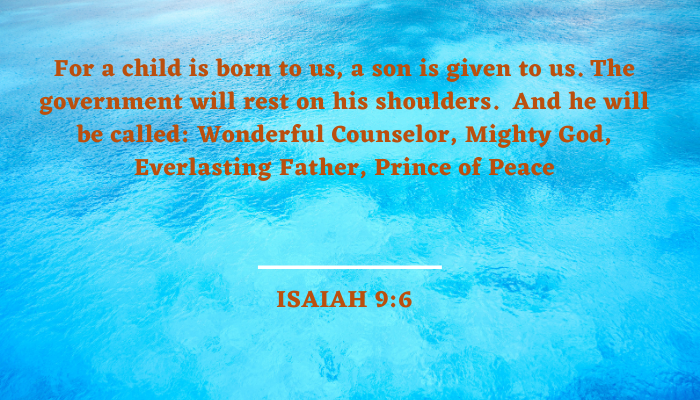 For a child is born to us, a son is given to us. The government will rest on his shoulders. And he will be called: Wonderful Counselor, Mighty God, Everlasting Father, Prince of Peace.

His government and its peace will never end. He will rule with fairness and justice from the throne of his ancestor David for all eternity. The passionate commitment of the Lord of Heaven’s Armies will make this happen!

The above verses from scripture were prophecies spoken through the mouth of Isaiah, the prophet. The child indeed was born about 800 years after the prophecy; the child was called Jesus. He grew in stature, wisdom & favor with God- Luke 2:52. And interestingly, He still rules in fairness & justice and I am confident that His reign is forever just as the prophecy had gone forth thousands of years ago.

The bible also tells us that the son(Jesus) was with the father(God) at creation so also was the Holy Spirit (John 1:1-3), so why did the son need to come to earth in flesh ?

Why didn’t He just save the whole of humanity from His throne above?

There are Principles & Laws that govern the earth; God honors them:

As God made the heavens and the earth, He gave to man authority and dominion over the earth. As soon as God gave man the authority, it meant that there had to be some form of relationship between God and man for God to do on earth as it is done in heaven. According to late pastor Myles Munroe, there always has to be a partnership between God and man for anything to be done on earth. More so, God never does a thing to earth or on earth without speaking to a man about it – Amos 3:7. That’s how much honor God has given to man, we just only have to play our parts right by walking with Him.

We could do a quick scan through the bible and even through time to evaluate how God has moved on earth. God always partners with a man who has surrendered His life to service & communion with the Lord.

A man untainted with sin needed to come to ensure cohesive Partnership with God:

As said above, God had raised many men and women in the past who were pretty effective in leading God’s lost children back to Him. So why did Jesus need to come?

Well, as powerful as those men and women may have been, they were flawed because they all came from seeds that had blemish – sin. This sin caused some level of limitation as God worked with these men. For example, God told Moses to speak to the rock so that water would gush out for His children to drink. Moses did the exact opposite from what God told Him to do, he went and struck the rock twice which made God angry- Numbers 20:8-11. This reminds me of Apostle Paul’s words in Romans 7:15 “For I know that nothing good dwells in me, that is, in my flesh. For I have the desire to do what is right, but not the ability to carry it out“.

For as long as a man is born from the seed of a woman, the inert struggle to please God & do His perfect always will be there. Therefore, God had to strategize a supernatural conception, in such a way that the seed wasn’t polluted in any way. Thus, God overshadowed Mary, and planted in her the seed of the Messiah. Yet again, we see how God partners with man to operate on earth. He could have just appeared on earth as Jesus, went to the cross and died for us but no! There had to be a partnership between God, Joseph and Mary to birth the Messiah.

And as Jesus grew, we read that Jesus went about doing good, doing the will of His father. It wasn’t a struggle for Jesus to do the will of the father – John 6:38. That was the kind of man God needed to go to the cross.

The Potent blood from a body without blemish was needed:

After the fall of man and the separation of man from God’s presence, one of the ways God devised to reconcile Himself with us was through the sacrifices of animals without blemish. The blood of the animals when slaughtered were used to atone for the sins of the people, and in this way they were able to approach God’s presence for a moment – Leviticus 16.

As proclaimed by John the Baptist, Jesus Christ was the lamb of God with no blemish whatsoever destined to take away all the sins of mankind once and for all – John 1:29.