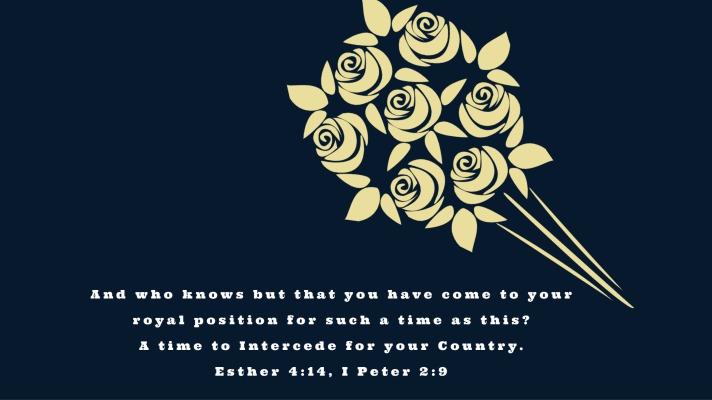 Overwhelmed, moved to tears, fuelled with anger at a point is how “roller coaster-like” my emotions have been in the past week because of the state of my dear country, Nigeria.

I have always had the knowledge of how imperfect things are, how things can be alot better. But over the past week reading stories of citizens who have been through alot of emotional trauma, grief, pain due to bad governance, police brutality and the likes just amplified everything for me.

And in a moment, I felt somewhat powerless, I began to question myself, think hard of things and ways I could help. Praise be to God who reminded me of the power that I have! He reminded me through a video from a couple that I had no knowledge of. The video popped up on my Youtube feed and I subconsciously listened to it, I was greatly blessed and strengthened.

The video made me go back to read of the story of Esther who had become royalty with the help of God. She gained exclusive access to the King because of her royalty status but this new status of hers didn’t change her identity as a Jew.

It came a time when her clan was faced with impending destruction by Haman, a man in authority at that time.- Esther 3:8-15. Then the bible tells us that Mordecai, who was a Jew and also Esther’s uncle tore his clothes, switched to grieve mood, started to cry out bitterly, loudly on the streets of the city when he heard the news. – Esther 4:1-2. I can only imagine how devastated he must have felt in that moment.

Thank God for men like Mordecai who aren’t selfish neither are they self-seeking. He could have decided to use his influence as the uncle of Queen Esther to his advantage to perhaps seek for protection for just his family. But he chose to utilize the advantage he had for the greater good of his whole community; the Jewish community.

Then he spoke with his niece who was the Queen to use her access to speak to the King on behalf of the Jews, to save them from the danger that laid ahead. Queen Esther hesitated initially which in my opinion is a valid and understandable reaction; her life may have been on the line. Her identity was not exactly disclosed to the King at that time and so approaching him with such a matter as delicate was risky.

But Mordecai was not backing down, he had such great faith that relief and deliverance would come to his people whether Queen Esther spoke or not!

For if you remain silent at this time, relief and deliverance for the Jews will arise from another place, but you and your father’s family will perish. And who knows but that you have come to your royal position for such a time as this?

His confidence is really something! And I pray that we have this same level of confidence in God always and forever in Jesus name.

Once he said this, Esther responded to him saying to him to organize the rest of his clan to embark on a three day fast and prayer just like herself before she approached the King with her petition. Esther 4:14

Now let us talk about how this Esther story relates to us or Nigeria in any way.

If we were to turn the plot around now, Nigerians or any nation in the world under some kind of oppression, disarray may as well take the place of the Jews who faced impending destruction if nothing was done about it while bad governance may just be our haman.

And Esther? Esther will be you and I who have been saved by the blood of Jesus, who have been called into the marvelous light of Christ and have unrestricted access to the King of Kings!

I Peter 2:9 says that “you are a chosen people, a royal priesthood, a holy nation, God’s special possession, that you may declare the praises of him who called you out of darkness into his wonderful light.”

Bringing these two verses together; who knows maybe it was for this reason God has saved us to bring His Kingdom down to Nigeria, to enthrone Him upon the affairs of Nigeria, to speak peace and progress upon Nigeria and the nations of the earth.

God works in mysterious ways that we may not be able to comprehend sometime. He took Esther to the palace knowing well that Her voice, access to the king will save the Jews some day. In the same light, God has not saved you and I just for ourselves. He saved us to shine His light, decree things that they may be established here on earth.- Job 22:28

Do I need to tell you who the King will be or rather is! The King is our God, Our God with whom nothing is difficult for Him to do!- Jeremiah 32:27

Reading Esther 4:14 gave me strength to keep pressing on in the place of prayer for Nigeria. And I share this with you to also encourage you to keep praying for your country; wherever it maybe.

Our prayers are valid and heard by God and He is in the works putting things together. Late Pastor Myles Munroe said something that still resonates with me, he said heaven stays open as long as we keep praying. Therefore as we keep believing and trusting God for open heavens upon Nigeria,the nations of the earth, let us keep praying it, speaking it, declaring it and decreeing it.

Let me also remind you that as the Israelites went through oppression in Egypt, they cried out to God continuously and it perhaps seemed to them that God was silent or not hearing them. But God was actually working out the perfect strategy to set them free, He was working on a man called Moses.

Moses, the great deliverer of Israel was being moulded by God. Although not seen by God’s children, God was working as long as they kept praying, the same way He is working things out for the greatest good of nations of the earth.

Be encouraged my dear, for this reason God saved you that you may decree the things you want here on earth.

To bring everything all together, short and simple: